Here is the next installment of the 1991 introduction to my Barefoot & Pregnant? volume 1. It’s pages 6-11 this time.

I’ll use the occasion to ‘dip my lid’ to the brilliant Jaki McCarrick. Her play “Belfast Girls” is soon to have its Canadian premiere in Vancouver in March this year, having had a wonderful run in London and Chicago already. There is a bit about it on the ‘Peninsula Productions’ facebook page, should you want to find out more.

As with the last couple of posts, I’ll try adding endnotes missing from the original a bit later, once i find the correct reference.

You can make the photographic image larger by clicking a couple of times or ‘pinching’. 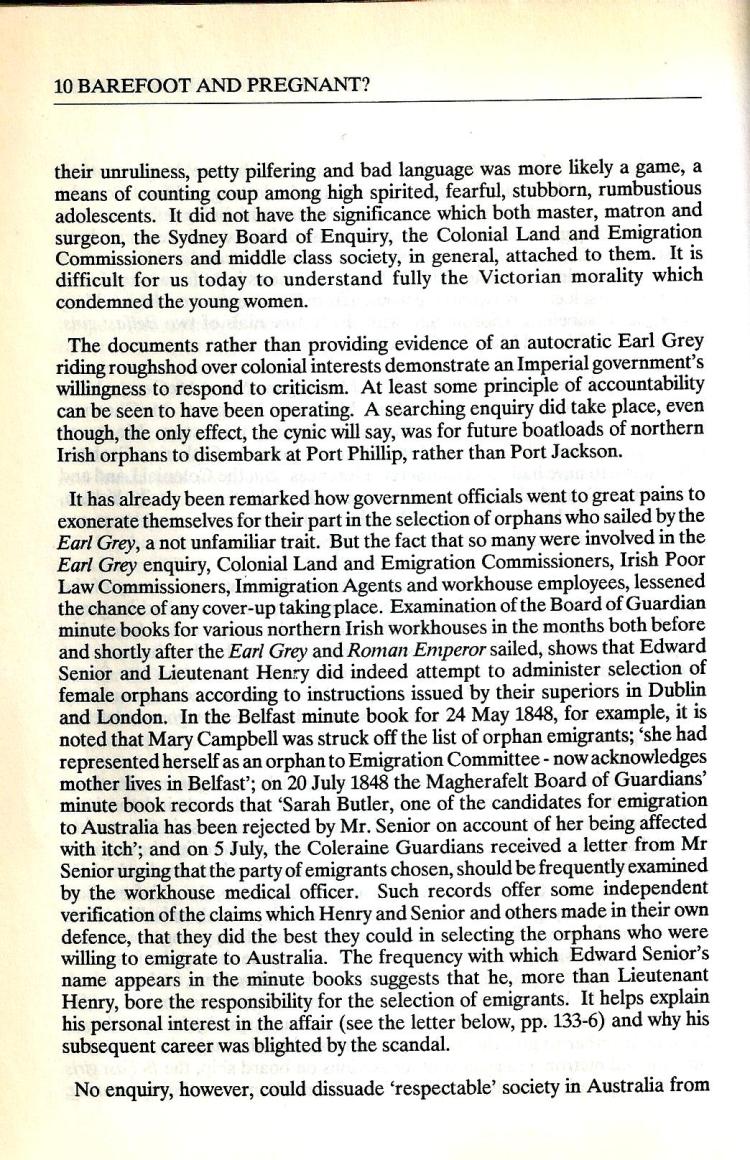 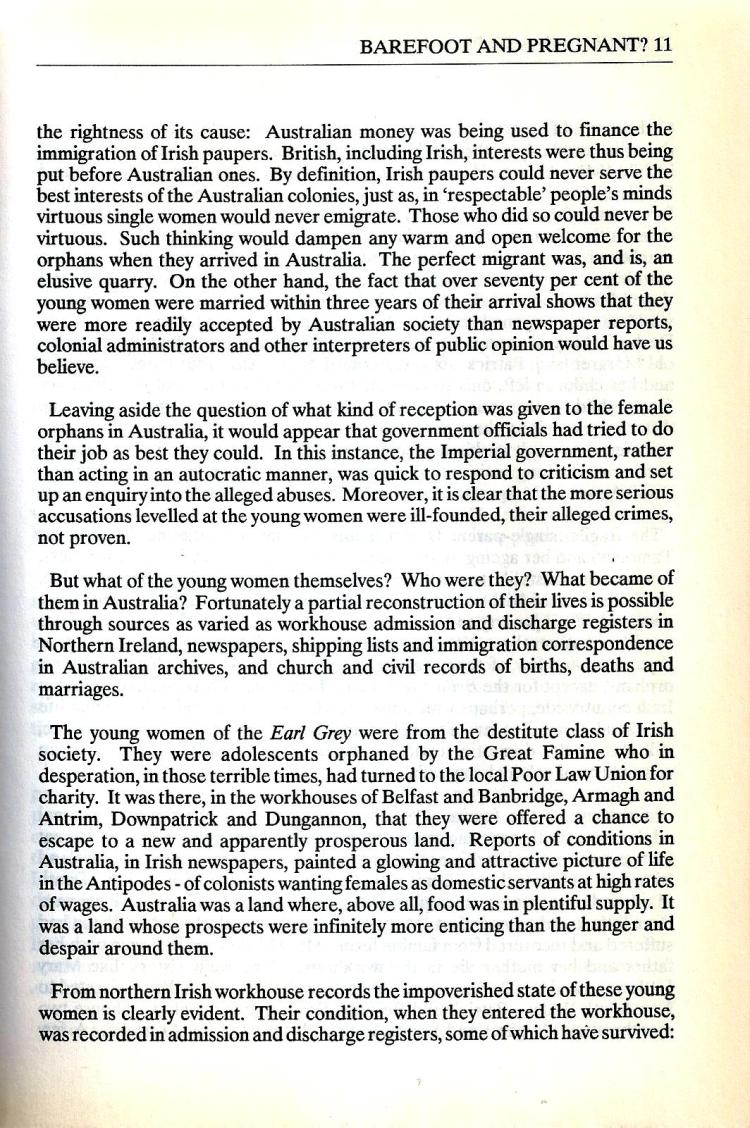 flutter round your head,

ancient tribes of the air

speaking a language your wild

The scandal surrounding the Subraon is not well known. However, if you take the trouble to read the very thorough enquiry of the Sydney Immigration Board you will understand more clearly how they would react to the furore associated with arrival of the first official Orphan vessel, the Earl Grey. Have a look at the extracts below.

The Minutes of the Sydney Immigration Board…re the irregularities aboard the Subraon, printed for the use of the Government only in 1848, comprises sixty pages, 75-80 lines per page, of small print. The Board consisted of Francis L.S. Merewether Esq., Agent for Immigration, A Savage Esq, RN Health Officer, and H.H. Browne Esq, Water Police Magistrate, names many readers of my blog will know. We even meet Thomas MaGrath, an immigrant who was schoolmaster on board the Subraon, (pp.15-17). We meet him again re Earl Grey orphan Mary Littlewood in my blog post 9 http://wp.me/p4SlVj-dQ

“The girls who acted as servants to the officers spent the most of their time in the cabins of the Captain and Mates, from about seven o’clock in the morning to about eight or nine o’clock at night….Emma Smith was servant to the Captain, Dorcas Newman was servant to the Chief Mate, and Alicia Ashbridge to the second and Third Mates. Alicia Ashbridge was more frequently drunk than any of the girls.Dorcas Newman was improperly intimate withe Mate. I saw him on one occasion sitting with her on a chair kissing her, and putting his hand through the opening in the back of her clothes, and feeling her wherever he pleased…“

“I was an Immigrant by the ship Subraon. I was one of the twelve girls who came from the Orphan Institution, in Cork Street, in Dublin.”

“From the evidence which I have in the course of this enquiry respecting it, I am satisfied that Dorcas Newman had a miscarriage; had I been aware that such was the fact I should have treated her illness differently from what I have done…”.

Later that year, 26 October, the Subraon was wrecked at the entrance to Wellington Harbour. The Sydney authorities had successfully kept a lid on the scandal surrounding the vessel’s voyage to Port Jackson. Both ship’s officers and the Surgeon were in no position to object. It would be a very different matter when the Earl Grey and Surgeon Douglass arrived early in October 1858.

Page 9 There is a history of one of the “Belfast Girls’, Mary McConnell, at my blog posts 32 and 33. Here’s a link to post 33 which seems underused. http://wp.me/p4SlVj-LL

The major source for the documents surrounding the Earl Grey furore is the Votes and Proceedings of the Legislative Council of New South Wales (hereafter VPLCNSW) 1850, volume 1, pp.394-436. (Incidentally, information on the Subraon follows at pp.437-45).

Dr Douglass continued to petition the New South Wales Parliament for restoration of his land. See  SMH 7 September and 19 September 1852, page 2 in both instances.

Many of the Workhouse Board of Guardian Minute Books have survived for the period we are interested in viz 1847-51. At present, they are held in the local Archives of each county. So, for instance,  if one wishes to view Donegal Board of Guardian Minute Books, a trip to the County Archives Office in Lifford is required. It is best always to get in touch beforehand and tell the archivist your particular interest. You have to arrange a prior appointment here. http://www.donegalcoco.ie/services/donegalarchives/maincolumncontent/researchroomservices/

If in doubt about what records have survived, your first call should be the wonderful website of Peter Higginbotham, www.workhouses.org

The Minute Books help us put the orphans into historical context. In this same volume, for example, page 27, 1 March 1848, we learn of the diet for able-bodied inmates.

“Breakfast 6 oz meal. One third of a quart of buttermilk

three days in the week

Breakfast 6 oz meal a third of a quart of buttermilk

two days in the week

Indian and oat meal used in equal proportions.”  And this was one of the better off workhouses!

Re Sarah Butler, Magherafelt Board of Guardian Minute Book B. G. XXIII/A/2, page 370,
‘Sarah Butler one of the candidates for emigration to Australia has been rejected by Mr Senior on account of her being affected with itch‘.

Coleraine BG Minute Books B.G.X/A/6, p.165. The Medical Officer, Dr Babington was also asked to provide the emigrants with a medical certificate stating they were healthy. The same page also gives the names of twelve young women from Coleraine workhouse who would travel on the Roman Emperor to South Australia. It is always worth looking at the original sources.