Visitors to the Irish Famine Monument at Hyde Park Barracks in Sydney will know well the glass panels where names of about 400 Earl Grey’s famine orphans are inscribed. As the late Professor Joan Kerr put it, “the transparent screen that takes its place bearing the names of…the Irish migrant women who lived at Hyde Park is a tribute to those whose journey created this bridge between a fondly remembered yet tragic past and a more promising yet alien future”. 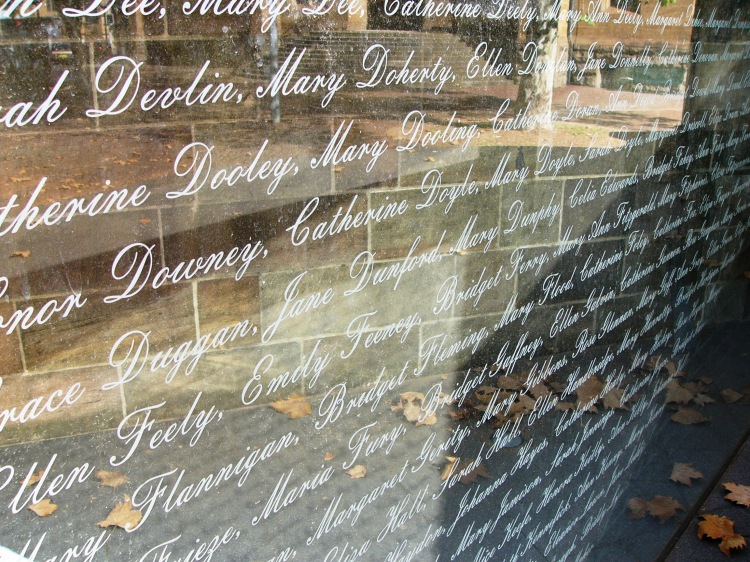 Perhaps you noticed how the names fade away at the edge of the panels. That ‘fading’ is the artists’ intent.

“The fading is part of the memorial – as their names fade on the glass so does the memory of some of these young female immigrants”.  http://www.irishfaminememorial.org/en/about-monument/

I imagine this first example is one of the ‘fading memories’ the artists had in mind.

Jane Lidd(e)y per Diadem from Leitrim

Before the nineteenth century wore out, there would be few people in Australia who would remember young Jane Liddy (Liddey) from Leitrim. She may have come from Carrick on Shannon workhouse, http://www.workhouses.org.uk/CarrickOnShannon/

When Jane arrived in Port Phillip as a sixteen year old she was apprenticed to William Brickwood of Brighton, being promised £7 per annum. In 1852 she married, and married well, to a man from Denmark nearly eighteen years her senior. Like many who profited from the Victorian goldrush of the 1850s, Charles Christian Frederick Stander, or Stender, provided goods and services to miners, and for a while had success as a miner too. When their last child was born in 1868, Charles Frederick was describing himself as a ‘Gentleman’. The family owned a hotel, The Golden Age, at Knockwood.

Here is the family ‘reconstituted’ from my days working in Victorian records.  Note how young Charles and Jane were when they died. Very few, if any, of their children would survive to adulthood. According to the ‘Account of Administration’ of the estate only one child, Joseph William, was still alive in 1889, and had reached the age of 21. 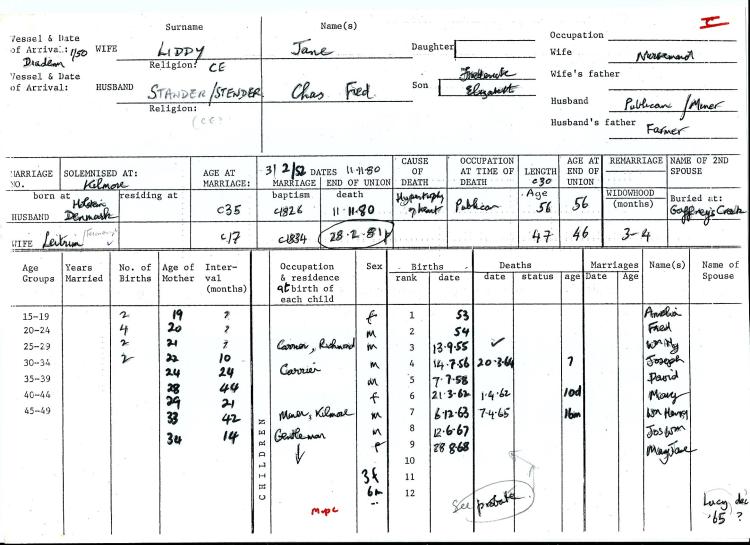 Here is the database entry.

By the time of Charles’s death in November 1880 his estate was valued at £1759, a considerable sum for those days. Jane’s estate would be valued at £338. Yet little of that would make its way into the pocket of any surviving children.

Here is the ‘Account of Administration’ of their estate which shows you where the money went. Quite a few people laid claim; 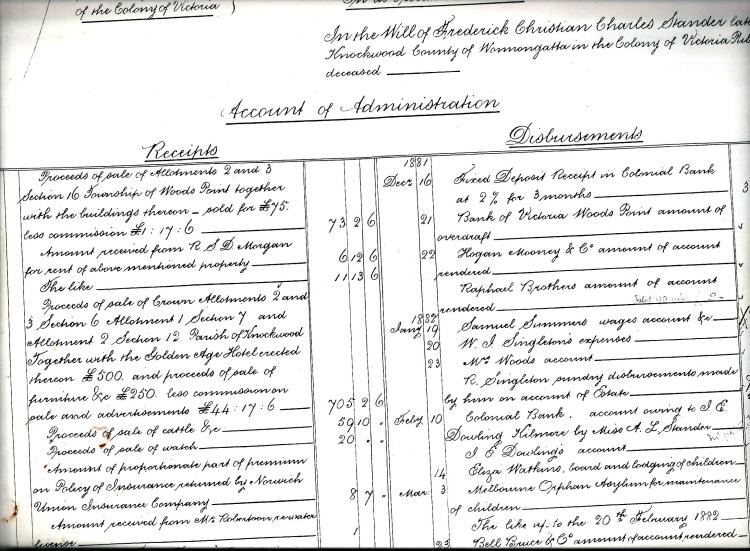 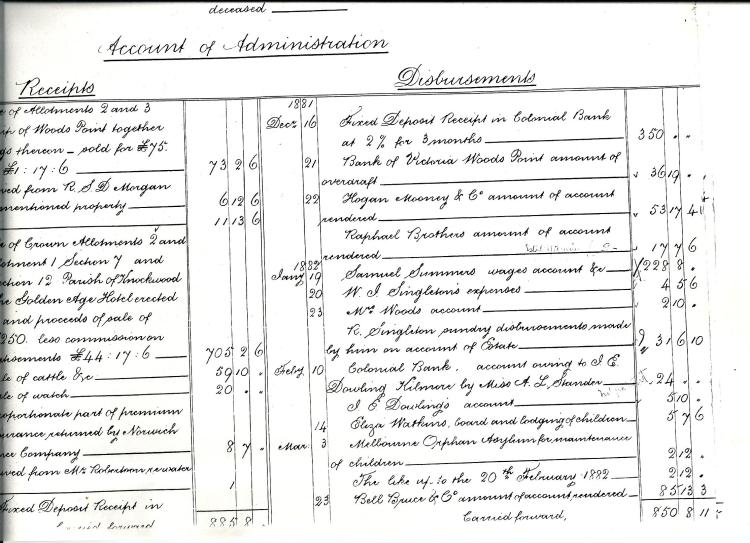 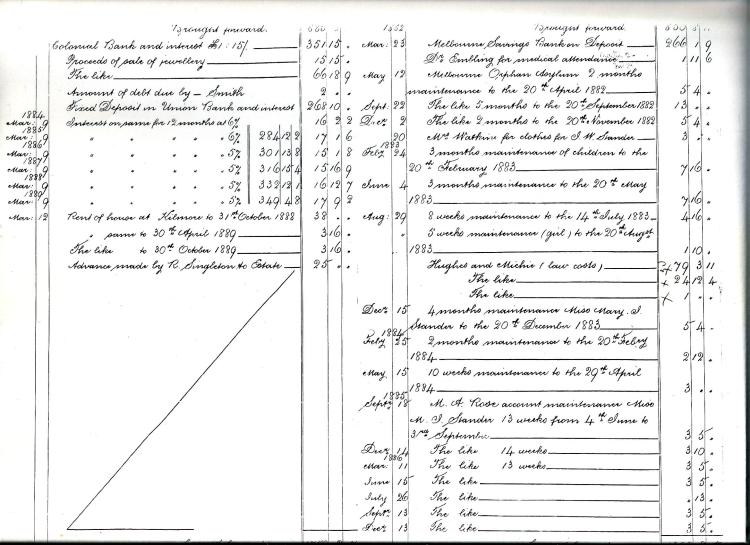 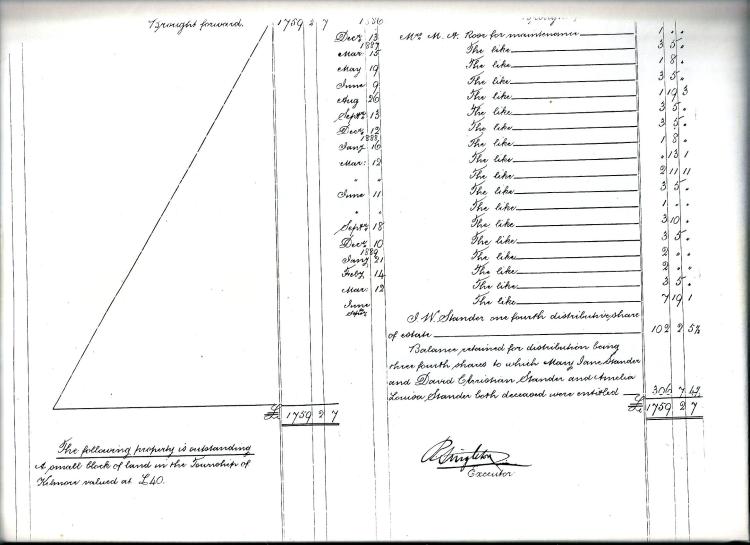 By June 1889, eight years after Jane’s death, Joseph William Stander having reached 21 was entitled to one fourth of the remaining estate, £102 2 shillings and 5 pence halfpenny. I wonder what became of young Joseph. Did he remember much about his mother? How loving she was? Where she came from? Did he know anything of her past?

Just a couple more brief histories. These ones are remembered.

She may have come from the Loughrea workhouse http://www.workhouses.org.uk/Loughrea/

Catherine married John Broderick in 1852 less than three years after her arrival. John was also from Galway. Together they had eight children, six girls and two boys. Her father Edward, convicted of Whiteboy activities, was transported to Sydney in 1832 and was supposedly living in Sydney. One hopes Catherine was able to find him. Irish birth dates and ages, especially for that era, are notoriously flakey. If Catherine was indeed only 18 when she joined the Inchinnan she may still have been in her mother’s womb when Edward was tried and transported. Like many of her compatriots Catherine knew the importance of ‘family’. Her sister Mary was also part of the Earl Grey scheme, arriving in the next vessel to Sydney, the Digby. Another sister Bridget who arrived by the Sabrina in 1854 may have been sponsored by Catherine and her husband.

Catherine and John had ten, or was it eight? children, and prospered in the Goulburn area of New South Wales. When John died in 1912, nearly eleven years after Catherine, his estate was valued at £2124. At one time I did have a photograph of Catherine’s grave in Laggan, Crookwell. I only hope i gave it to someone who cherished it.

From the database, originally in Barefoot vol.2, p. 166 which lists my informant Pat Astill of Narromine.

The next one is a tale of acculturation, two of Catherine’s children organised the Gilgandra Coo–ee recruitment march in the spring of 1915 during the First World War, shortly after their mother had died. I wonder would she have approved. Would she have voted against conscription? Or perhaps she too, like her sons, became caught up in defence of the British Empire.

Catherine may have come from Rathkeale workhouse http://www.workhouses.org.uk/Rathkeale/ 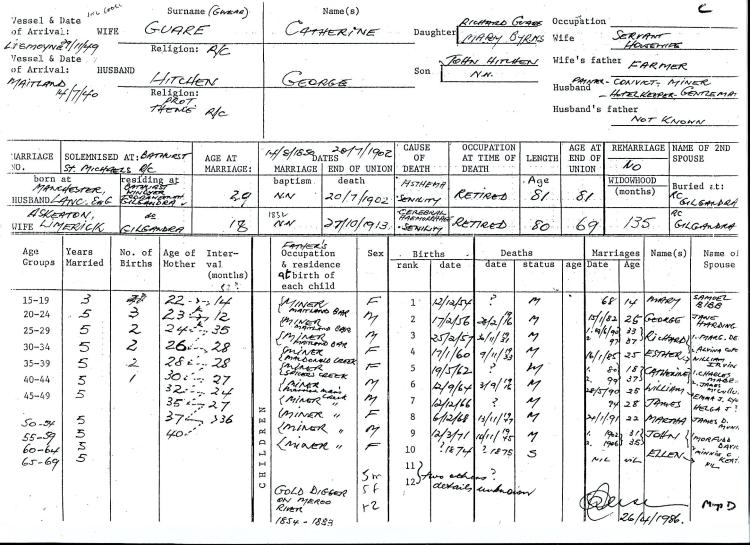 My Barefoot volume 2, p.218 has a bit more. “Catherine died 27 October 1913, buried Gilgandra; her estate valued at £1049. Their present descendants number in the region of 1200 people. Her obituary is in The Leader and Stock and Station News, Morning Daily, Orange, 29 October 1913. There is an excellent family history by her descendant David Leese”. I see David did a good job of filling out my family reconstitution form in April 1986!

Catherine’s obituary appears in Barefoot vol.2, p.136. It begins “There crossed the bar, at the ripe old age of 80 years, on Monday night, Mrs Catherine Hitchen, one of the grand old pioneers, who “won the land from the bitterest wastes out back“. Like Charles Stander, George Hitchen would make his fortune as miner and later hotelier, first in Tooraweenah, then ‘at Collie, on the Marthaguy Creek, mid way between Gilgandra and Warren’, and finally Dubbo. According to The Leader and Stock and Station News, “Mrs Hitchen was well known for her charitable deeds and actions, and many a western man and woman of the old and sturdy stock will shed a silent tear to the memory of the departed lady“.

Finally just a couple of extracts from the wills of orphans who prospered in Australia. They are a contrast with the sad lives of those on the streets of Sydney who appeared in the last couple of posts. Neither epitomizes the history of the orphans in Australia.

The first is of 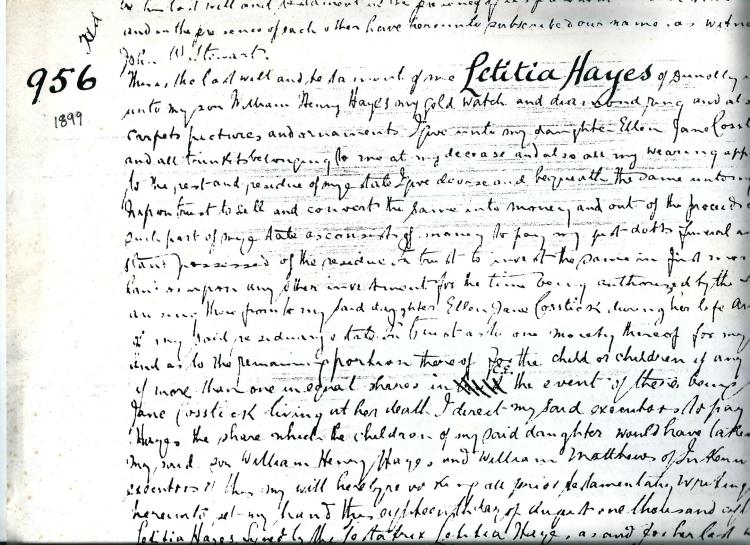 What a turn up for a youngster who was of no fixed abode in 1848! 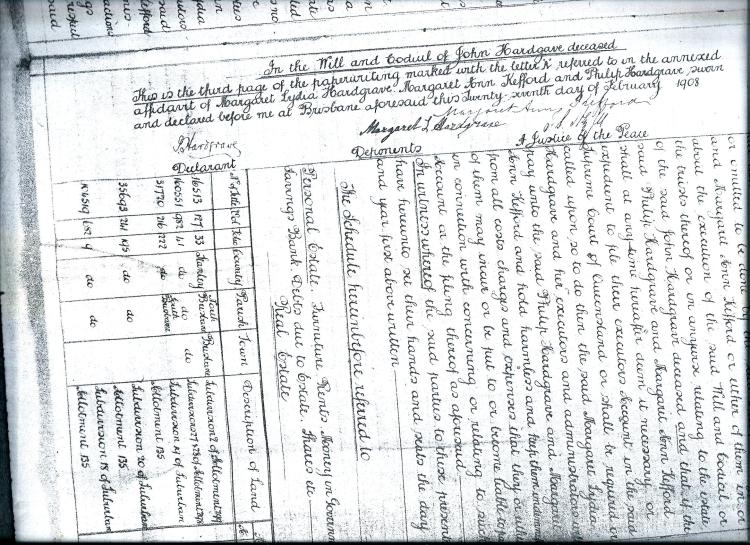 Please excuse the quality of these scans. At least they should give you an idea of the Hardgrave family’s  extensive landholdings.

“What is it that we really know anyhow? We cannot hold the truth of this world in our hands. And this word truth, what can a word measure? The truths that men hold solemn, their beliefs and their doctrines and their certitude, all of it is but smoke on the wind. And so I am happy to as I am in this not knowing…”. Paul Lynch, Grace, p.353