One of the advantages of this blogging business is that you can lay your cards on the table however you like. Some of what I’ve done already is all of a jumble, set down and put out as I came across material in my filing cabinets. The beauty of it is, nothing is set in stone. My intention is to revisit some of my more substantive posts when I get the chance. Post 16 http://wp.me/p4SlVj-h8 looks as though it could do with some reworking, for example.

In the meanwhile, here are a couple more stories I hope you will like. South Australian Irish Famine orphans are relatively neglected. It may be because there weren’t so many of them or maybe they are just hard to trace. Let me suggest some avenues of research which I hope may have wider application. I’m just casting a net and hoping when I drag it to shore I’ll have an interesting catch.

Mary Taafe from Dublin per Inconstant to Adelaide 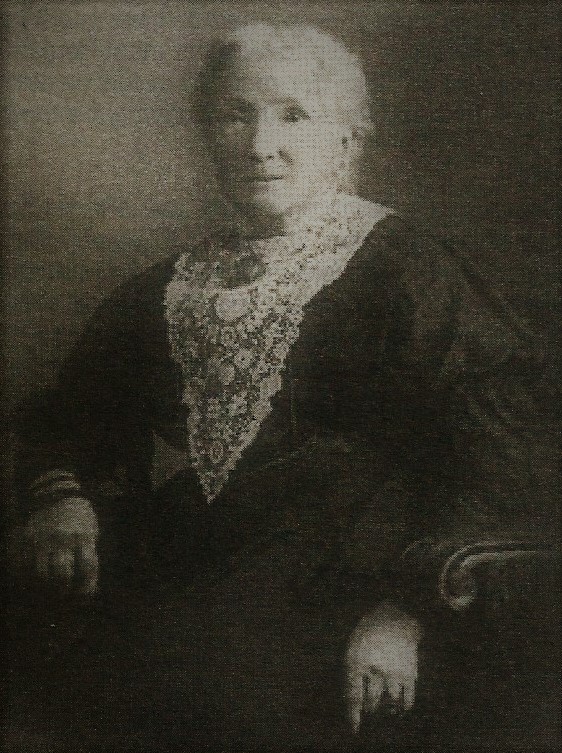 Mary was to live a long life with her convict husband, Samuel Dunn from Nottingham. After marrying, the couple moved quickly to Victoria where Mary was to give birth to fourteen children, nine boys and five girls, three of them dying in infancy or childhood. She herself lived till she was ninety. 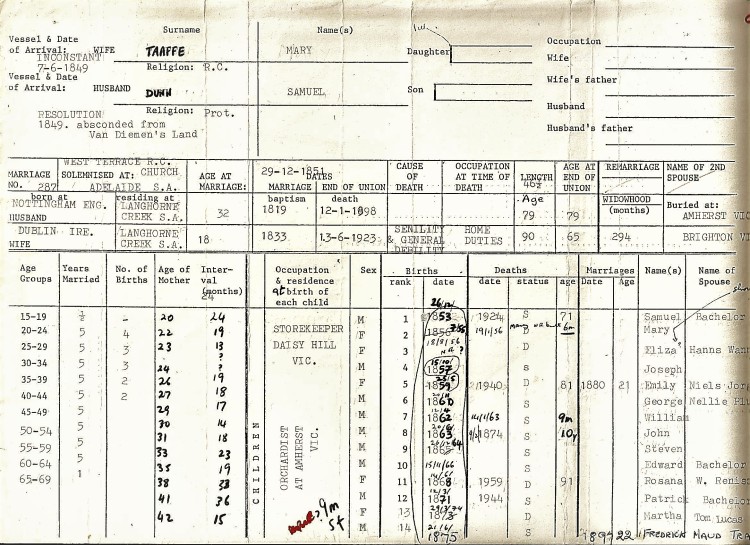 It must have been Dawn Barbary who sent me this. Thankyou Dawn. Dawn supplied the names of her and Samuel’s childrens’ spouses, Hanns Wanned, Niels Jorgens, Nellie Plunkett, W. Renison, Tom Lucas, and Maud Tr…. Maybe their descendants have yet to discover they have an Irish Famine orphan in their family.

Our starting point, as always, must be the Irish Famine Memorial database for it has the most up to date information. There in synopsis is what is known about Mary. I wonder if Eliza was Mary’s older sister. That would mean she had a younger sister called Ellen and a mother called Mary. What kind of proof would we need for that?

I remember working with those North and South Dublin workhouse Registers in 1987. They were large, heavy registers closely packed with names which were sometimes difficult to read. Nowadays you can gain access to these Dublin registers online if you subscribe to findmypast.ie

In the North Dublin Register (National Archives of Ireland [NAI] BG 78/G/6 number 30984) Mary was described as being ‘in good health‘ and from Jervis Street in the city. Jervis Street runs directly north from the Ha’penny Bridge, not far from the city centre. Not that Mary would recognise it today.  In Mary’s case, the Workhouse Register explicitly states, “sent to Australia“, as indeed it did for some others, Bridget Fay (28228), Eliza Harricks (29777), Mary Ann Newman (BG78/G/5 No.20650) and  in G4, no.14640, Rebecca Thompson. Mostly, however, one has to use the method I described  in blog post number five, http://wp.me/p4SlVj-4X See about a third of the way down under “Identifying the female orphans”.

The next step is to Peter Higginbotham’s brilliant work on workhouses to find out more about the workhouse Mary was in. See http://workhouses.org.uk/DublinNorth/

That is one excellent website, worth the many hours I’ve spent exploring it.

Casting the net a second time, I dragged ashore an article by Flinders University academic, Mark Staniforth, that treats the orphans who came to Adelaide on the Inconstant. Do have a look for yourself

Dr Staniforth also offers information about individual orphans, some of it originating with family historians. Mary Taafe is one such, where the claim is made that Eliza was indeed her sister. But no proof of that is offered there. I believe it is important to always ask, how do you know that, what evidence do you have, and how reliable is your evidence? Is your claim based on hard fact or have you taken imaginative license or a leap of faith? Just so long as you state clearly what the position is.

And to emphasise how treacherous this ‘telling orphan stories’ can be, compare Dr Staniforth’s brief biography of Catherine Bracken with Karen Semken’s that appears on the Irish Famine memorial website at http://irishfaminememorial.org/media/Catherine_Bracken_Inconstant.pdf These two accounts show us how easy it is to become ensnared in the tangled webs we weave.

One is a straightforward account of Catherine from Parsonstown (Birr) workhouse marrying William Robinson at Mount Barker in 1851, their having at least three children, and Catherine dying aged 52 in the Clare Valley. (Staniforth, p. 37, after the endnotes).

The other is a thoroughly researched and beautifully illustrated tale of ‘murder and mayhem’. Catherine’s first husband had his throat slit in 1856, and her second was executed in 1862 for the murder of their servant Jane McNanamin at Salt Creek. Catherine married yet again, for a third time, to George Ingham in 1871. According to Karen, she died in 1915 and is buried in West Terrace Cemetery, Adelaide. Karen mentions that one of Catherine’s descendants Dawn Ralfe was writing a book about Catherine. Does anyone have any news about this?

Karen has a facebook page devoted to the orphans. There are some great photographs there. https://www.facebook.com/EarlGreyIrishOrphans/ On the 5th April 2015 for example, she posted a pic of Matthew Moorhouse’s residence, next door to the Native School that acted as an Immigration Depot for the orphans. The same pic appears in her account of Catherine’s history at page three of the link above.

Karen’s revision of Catherine Bracken’s history raises a larger, interesting question: how many of the orphans had a criminal history in Australia, however minor their crimes or misdemeanours might have been? Those that did were found guilty of minor crimes, being drunk and disorderly, obscene language, petty theft, or ‘vagrancy’, a charge which the police often used instead of ‘prostitution’.

The information on this next family reconstitution form was from an excellent genealogist, Wendy Baker, sent to me in 1986. I hope Wendy is still with us. Margaret Dea(n)(e)/Duhy had five female children by her first husband Robert Strickland and another, Lucy, by her second, Charles Lindrea. Like Mary Taafe she left South Australia and sought her fortune in Victoria. 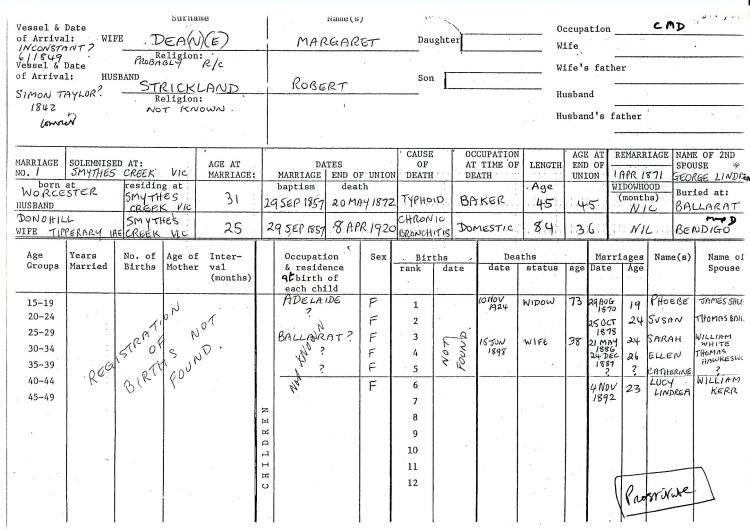 I have the honour of forwarding a report by the Children’s apprenticeship Board, on 621 female orphans introduced into the colony during the last two years.

2. Thirty two cases of crime or misconduct were brought before the police magistrate; six are mothers of illegitimate children, and required relief as destitute persons at their lying-in.

Six more are living in the country in adultery.

Forty three have fallen into the condition of common prostitutes; although all had been placed by the Board in respectable situations…”.

(In all, less than fifteen percent of orphans, my comment).

Sixty-six circulars had been sent to Police Magistrates throughout the colony asking about ‘the conduct and respectability’ of the orphans in their district. Only thirty Magistrates had replied. (British Parliamentary Papers, Irish Universities Press edition, Colonies Australia, vol.13, Sessions 1851-52, Papers relative to Emigration, p.292). [I only wish our own present-day pollsters explained to us the methods they use, and on what their results are based].

I wonder if asking how many of the orphans were incarcerated in Melbourne Women’s prison or in Darlinghurst gaol, or in Yarra Bend mental hospital, or Wollston Park, in Liverpool Lying-in hospital, or Dunwich Benevolent Asylum, or any similar institution, is the question I want to ask. A minority of the orphans (and how substantial a minority is moot) i believe were bound to spend part of their life in such institutions.

Some have even suggested the trauma of the Famine made the Irish more susceptible to mental illness. I remain unconvinced. As I’ve said elsewhere, to suggest our orphans were transmitters of some workhouse dumping ground mentality, or biologically prone to some sort of “Celtic Melancholy”, or psychologically predisposed to mental illness, ‘borders on bigotry'(Akenson?).

Unlike most assisted Irish immigrants, the Earl Grey orphans were not part of a safety network. They did not have a network of ‘friends’,– friends in the usual sense of people from the same village or locality with whom they had a close, long-established relationship, and friends in the Irish sense of family members, once, twice and even thrice removed–friends they could turn to in times of need. They did not have a complex safety-net, woven with threads of kinship. That  is what made them vulnerable to alienation in their new Australian world.

The question we may prefer to ask is what stratagems did the orphans use to deal with whatever life threw at them? What legal rights did they have? When they were young, did they get married in order to escape a burdensome master-servant contract? And if their husband was legally allowed to beat them with a stick, how did they withstand domestic abuse? Did they adopt the drinking habits of their husband? Fit in, or flee? Ellen Leydon from Ennistymon in County Clare who arrived by the Thomas Arbuthnot, ‘married’ six times, using(?) males as her ‘shelter’, her way of coping. See her story towards the bottom of http://wp.me/p4SlVj-dQ And when old, if your husband has died and you do not meet the requirements for entry to a Benevolent Asylum, do you deny your children, say you have lost touch with them, say you have no money, and no means of support. Then you will meet requirements. Do as needs must. Did the orphans contest the historical role colonial society imposed upon them? Did they negotiate a place for themselves? Or is that being too optimistic?

(I’ve just started reading Garry Disher’s Her. That will cure any desire to return to the ‘good old days’).

May I ask if anyone knows a good general history of women in Australia that would help  answer the questions asked in the last part of this blog? Which historians can we turn to? Shurlee Swain? Christine Twomey? Tanya Evans? Diane Kirkby? All suggestions gratefully received.

For those who  didn’t get to hear Dr Kildea’s oration at Hyde Park Barracks on the 27th August 2017, Tinteán have kindly put it online at https://tintean.org.au/2017/09/06/only-nineteen/

Thank you Jeff for a brilliant, poignant speech.